With decades of marketing experience and deep insight into the undergraduate admissions process, Willie will guide you in completing your applications and prepping for interviews. Let him help you show that you have what your dream schools seek.

I want to work with Willie!

I completed my undergraduate education as the best state school that I could afford, Ohio University. After the Peace Corps, I decided to aim higher for my MBA studies and applied to Northwestern University. My two years at Northwestern’s Kellogg School of Management were life-changing.

Over the next fifteen years, I zigzagged between industries (airlines, consulting, and financial services) and geographically, working in seven foreign countries. I ultimately moved to Miami, where I founded and led the local Northwestern and Kellogg alumni organizations as well as a federation of 20 South Florida MBA alumni clubs.

Another alumni club leader once termed me “instantly memorable” due to my enthusiasm to serve the collective. In 2011, I was honored as Kellogg’s worldwide alumni volunteer of the year.

Two years later, Kellogg hired me to carry out projects in Brazil. While in São Paulo, I was also named Northwestern University’s Alumni Admissions Council Director for Brazil, a role I held through two complete admissions cycles. I interviewed over 30 high school seniors each year who were each applying to several top tier universities in the United States.

Last year I met individually with over 200 Latin American executives considering MBA studies, in sessions lasting up to two hours. The most common feedback I received at these meetings was that I had “re-energized” their interest in an MBA. Twelve of "my" candidates applied to Kellogg’s EMBA program---all were accepted. When one later approached me on campus just to tell me that he “would not be here if it were not for me”, I was floored by just how rewarding advising candidates could be.

My work on behalf of my alma mater has given me profound insight into what Northwestern and other top tier schools seek in applicants. Let’s harness this insight to your benefit. I want to help you get into the program that you feel passionate about and will benefit the most from. After all, the campus experience might only last four years but upon graduation you will join an alumni tribe for life. Let’s make it a great one!

I am a dual citizen (US and Brazil); speak English, Spanish and Portuguese; have lived in 13 countries (11 post-MBA); and have visited 80 countries as well as dozens of college campuses.

Now that you know quite a lot about me, I look forward to learning about you, guiding you to acceptance, and assisting you in realizing your dreams.

Would you like to work with Willie on your application? Just fill out an inquiry including any information you think will be helpful. Willie will contact you ASAP. 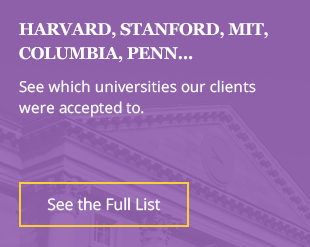 "Good news. I have been accepted to Cornell!
Thank you so much for your help along the way. Your feedback was always thorough, on-point, and very honest. Thank you again - couldn't have done it without you."