Get Accepted! Find the service that best meets your needs:

Everything you need to know about postbac, med school and residency admissions. Right here. 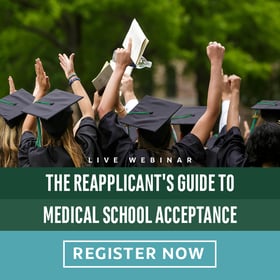 Rejected from med school? Your MD story isn’t over! But it is time to change the narrative. Join us for The Reapplicant’s Guide to Med School Acceptance to uncover what went wrong and how to fix it. Register now! 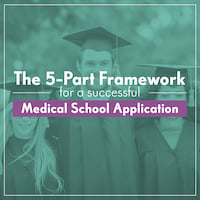 What are med school admissions committees really looking for? How can you stand out in a competitive field? Learn to approach the med school application process strategically with The 5-Part Framework for a Successful Medical School Application. Watch now!

Subscribe to Admissions Straight Talk, our weekly podcast on what’s new, thought-provoking, and useful in the world of med school admissions. Listen today!

Learn specific steps you can take in the months leading up to the med school application cycle to strengthen your profile, ameliorate any potential weaknesses, and prepare to apply strategically and successfully. Get your guide!

Choose Accepted and get matched with your own personal mentor, handpicked specifically for you from our team of uncommonly talented professionals, including former admissions directors, published authors, and PhDs.

Accepted.com was instrumental in my success.

I began working with Dr. Rothman through Accepted after two unsuccessful attempts at applying to M.D. schools. I had little hope or confidence, but after working with Dr. Rothman I saw a dramatic change in how medical schools were viewing my application; I even landed an interview at a school I thought was huge stretch! Most importantly, Dr. Rothman became more than just a personal statement advisor in a formal manner, but rather, became a mentor for my whole application as well as in handling the stress of interviews and bad news. He really enjoys getting to know students and took the time to go over much of my life story to find inspiration for personal statements and essays. Using his feedback in crafting my essays and my interview responses, Dr. Rothman became an essential part of maturing my application and myself this cycle. I would highly recommend Dr. Rothman as an application advisor from Accepted.  - Chris

I want to start by giving an overall review of Carol. She was instrumental in my PA schools applications. She went so far above and beyond to provide me with support during both of my application processes. I hired Carol to edit my essays, but she did so much more than that. She called the programs to which I was applying to obtain more information and save me from seeming like an annoyance to them, she had several lengthy phone conversations with me to discuss my progress, and she made me feel like I was her only client when I know she had many others. On top of that, Carol is hilarious and I loved conversing with her. I did not get accepted to PA after applying for the first time, but that was due to my low GPA, not because of my application. After this cycle of rejection, Carol spent an extensive amount of time coaching me on what I could improve upon, for which I am forever grateful. She taught me so many tips and tricks about the application process that I never would have known had I not sought Accepted's help. Carol enlightened me about so many nuances of my application and of the application process as a whole. Because of Carol's guidance, I was truly proud of the applications I submitted.

On a macro level, Carol's editing is superb. Her cogent advice and her extensive knowledge of the healthcare (med, PA, nursing school) admissions processes lent themselves greatly to my essays. She knew what aspects of my background I should highlight and taught me how to paint a positive light on the less-than-stellar aspects of my application. I would rate her a 10/10. On a micro level, her editing helped me immensely. My writing has a tendency to be verbose and unclear, and Carol helped me to be more concise and to the point. When it comes to cutting down the character count of an essay she is a wizard! Her micro editing was also a 10/10.

The service I have received from Accepted has been exceptional. I would rate it a 10/10 for sure! There were only a few times when Carol was not able to keep to the 2 day turn around commitment, but in those instances she would always communicate with me and let me know when she expected to have it completed.

Carol's ability to give constructive criticism is quite possibly her strongest attribute. She was able to tell me exactly what was wrong without sugar-coating it and I greatly appreciated that. She is direct, yet still polite and considerate, not to mention she has a great sense of humor! She provided support, made her self available for questions or concerns at nearly all hours of the day and evening, and never stopped giving words of encouragement.

On a scale of 0-10 I would absolutely rate Accepted a 10. I have and will continue to recommend Accepted and Carol to people.